On Tuesday, after much anticipation, the first of a six-part series, written and presented by Henry Louis Gates Jr., aired on PBS nationwide.  “The African Americans: Many Rivers to Cross” features a fascinating documentary about the history of African Americans, from the roots of slavery to-date.  Gates as always, gives the narrative an edge unlike other documentaries before, and applies a much broader perspective, providing details that may be largely unknown to the mainstream audience.  Gates connects the dots, from the moment Africans became slaves, to the experience and transformation those slaves endured in their journey to eventually become African Americans.  The documentary bridges together ancestors and descendants, Africa and America, Sierra Leone and South Carolina, Haiti and Virginia, almost removing the ocean that divides both sides of the Atlantic.

In the first episode, one could not help but notice the overwhelming mention of Sierra Leone throughout the hour long program.  To many non-Sierra Leonean viewers who are familiar with the name, it may have been startling at the least, as over the years the name seemed to have become synonymous with blood diamonds; from the portrayal of the country’s civil conflict in the movie “Blood Diamond” starring Leonardo Dicaprio.  Slightly over a decade of tragedy however, isn’t enough to remove the historical value the country has.  Such historical value, although several books written by notable scholars exist, rarely get covered in the mainstream.  Much of the historical discourse takes place among exclusive circles of historians and related focus groups such as museums, historical archives, and some Sierra Leonean families.

It was refreshing to see African American history in general, and Sierra Leone’s role in it specifically, presented to such a large-scale audience, on a well-known media platform, by a respected Scholar.  It not only confirms the historical value of Sierra Leone history to world history, it also makes it unavoidable to understand the emergence of the African Diaspora across the Atlantic without considering the country’s role over the centuries to the various stages of the African’s experience within the past few hundred years.

END_OF_DOCUMENT_TOKEN_TO_BE_REPLACED

“Can Events & Experiences of Our Past Shape Our Future?“, was the title of the Blogtalkradio program, “Powordful” hosted by Olive Guillais-Lazure yesterday October 9th.  Featured on the program in honor of black history month in London, was SPPKH Director of Research and Historical Archives, Nigel Davies, who discussed various elements of history and Krio history especially.  Listen in (starting at the 8 minute mark) to Nigel and Olive discuss history, our past, and the Sierra Leonean Krio.

An excerpt from the

An Examination of Primary Sources
The ‘Senior Service’ of Sierra Leone, 1885 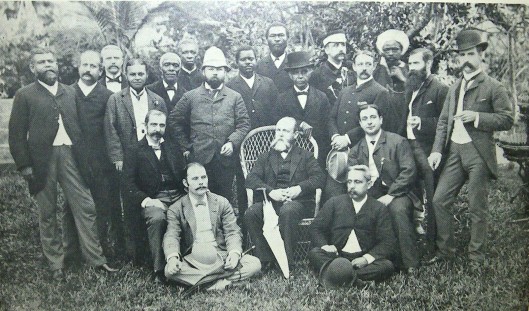 This photograph from the Colonial Records Office depicts the Senior Service, comprised of high-ranking colonial officials in Sierra Leone. The group was awaiting the arrival of Governor Sir Samuel Rowe who had returned to England earlier that year. Seated in the middle with the umbrella is Acting Governor Francis F. Pinkett who was the Chief Justice.

From left to right the photograph depicts: Melvin Victor Dermont Stuart, the Afro-Bahamian head of customs, next to him is Captain J.N. Compton who is standing slightly in front of Mr. Robert Wade, the Freetown jail keeper. In front of Mr. Wade is Dr. Robert Smith, the Assistant Colonial surgeon and scion of a prominent Krio family.2 The elderly white haired gentleman left of Dr. Robert Smith is Thomas George Lawson, the Popo born Chief’s son who was the Government Messenger and Interpreter and mentor to JC.E. Parkes.3 Between T.G. Lawson and C.H. Moseley, (the gentleman in the sunhat who was the Assistant Colonial Secretary), is Reverend John Campbell. Next to Rev. Campbell is the Assistant Postmaster, James Hastings-Spaine, the son of an Aku Recaptive from Hastings4. The tall bearded gentleman next to J.H. Spaine is Daniel Carrol, the Master and Registrar of the Court and the last lawyer to practice without training.5 Next to him in the dashing top hat is John Meheux, the Sheriff of the Colony who was the son of a French trader and a Temne mother.6 Next to Sheriff Meheux is Alfred Revington, Acting Inspector-General of Police. Next to Mr. Revington is T.R. Pakenham, the Assistant Colonial Secretary of the Aborigines branch. The gentleman in the turban is Mohammed Sanussi, Arabic interpreter and writer. The next and final two gentlemen on the right are R.E. Pownall, the Colonial Surveyor and J.C. Gore the Auditor-General. The individual seated on the immediate right of Acting Governor Pinkett is T. Riseley Griffith, the Colonial Secretary and Treasurer. On the left of Acting Governor Pinkett is J.K. Donaldson, the Queen’s Advocate. The gentlemen seated in front of Governor Pinkett are E.J. Cameron, the Assistant Colonial Secretary (seated on the left) and Edwin Adolphus, the Police Magistrate.

2 Dr. Robert Smith was from a distinguished Krio family; his father William Smith was the former Registrar for the Mixed Commissions Court and his father, William Smith Sr was an Englishman from Yorkshire who had served as the senior Judge of the Court .Dr. Robert Smith’s mother was Charlotte Macaulay, the daughter of Governor Kenneth Macaulay (relative of Lord T.B. Macaulay) and a Recaptive mother. Dr. Smith was also the half-brother of Adelaide Casely-Hayford.

4 J.H. Spaine was the brother of Canon Samuel Spain who married Elliott in 1882

6 John Meheux would die a year after this photograph was taken. His youngest daughter, Nora Meheux would work for Paterson and Zachonis.

The Society for the Preservation and Presentation of Krio History was established by Effie Olayinka Johnson, Akindele T.M. Decker and Nigel D.D. Browne-Davies in order to promote the unique culture and historical experience of the Sierra Leone Krio people (also known as the Creoles).

Krio History is representative of the African diaspora.  It highlight West African educational achievements as well as the contributions of Sierra Leone to Black history on the continent as well as the Americas and Europe.

Akindele Decker is a Sierra Leonean poet and writer based in Maryland, USA. He has conducted independent research on Krio history and family genealogy for over 3 years.  He also serves as the Secretary-General for the Sierra Leone Gullah Heritage Association (SLGHA), an organization which focuses on the unique connection between Sierra Leone and the Gullah-Geechee African American community of South Carolina, Georgia, and Florida.

Effie Olayinka Johnson is a young Krio whose passion for Krio history and culture is longstanding. She is the founder and executive director of the Sierra Leone Collective Memory Initiative. Her academic interests of democratization, conflict resolution, and the political and economic development of Sub-Saharan Africa have been driven by her connection to Sierra Leone. Effie worked as a staff assistant in the district office of US Representative Jim Cooper and interned for the Central and West Africa (CEWA) Team at the National Democratic Institute for International Affairs where she worked on development programs for Guinea-Bissau and the Sierra Leone election monitoring project. Johnson is a 2008 graduate of Harvard University where she received her AB in Government and a 2011 graduate of New York University where she received her MPA in International Public and Nonprofit Management and Policy.